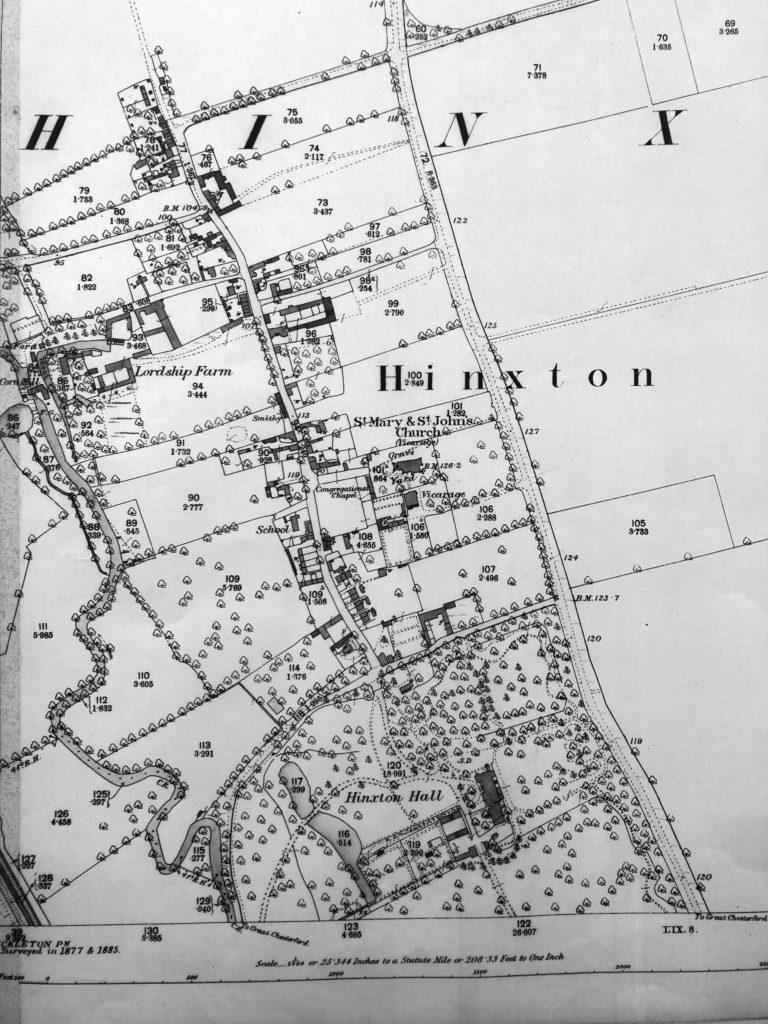 The village of Hinxton, and its surrounding estate, is located in the county of Cambridgeshire, around ten miles south of the city of Cambridge. It is likely that this area was home to ancient populations from the Neolithic period and the Bronze Age, but the first direct evidence of a settled community is an Anglo-Saxon one.

By 1086 Hinxton was recorded in the Domesday Book as having a population of 38 households, placing it in the largest 20% of settlements in England at the time. The population of Hinxton stayed relatively constant throughout the medieval period, and rose steadily through the 17th and 18th centuries to a peak of 465 in 1851.

The land that includes the current Hinxton Hall estate was once owned by Michaelhouse College, Cambridge, which was absorbed into Trinity College during the reign of Henry VIII. Ownership of the estate is unclear through Tudor times, but by the late 1600s, it was in private hands. The first documented evidence of a building on the site appears in the 1700s, when Joseph Richardson of Horseheath built a fishing retreat and called it Trout Hall. The retreat was described by Richardson’s contemporaries as a ‘pretty neat box’.

Later in the 18th century, the estate was sold to Thomas Brown of Ickleton. His nephew Richard Holden settled it on his daughter Mary, who was married to John Bromwell Jones. Jones was responsible for the demolition of the original Trout Hall, and the building of a new Hall between 1748 and 1756. This is the heart of the central three-storey block and basement of Hinxton Hall which exists today. Jones also built stables and established a kitchen garden and fruit orchard, to create a rural estate suitable for a wealthy Georgian family.

William Vachell married into ownership of the Hall, formally taking it on in 1771. He held the office of High Sheriff of Cambridgeshire in 1783, and makes a brief appearance in Boswell’s Life of Johnson. Later in the 19th century Edward Humphrys Green de Freville (in 1843) and his nephew Edward Henry Green de Freville (in 1894) followed in William’s footsteps as both masters of Hinxton Hall and High Sheriffs of Cambridgeshire.

Over the next hundred years, the Hall passed through several more families, and was extended with two new wings, and facilities such as a game larder. During the 19th century, the de Freville family became the new owners of the Hall, and undertook significant alterations to the house and its grounds. Edward de Freville was responsible for enriching the interior of the Hall with decorative elements that were popular at the time. Many of these reflected the experiences of the wealthy social elite who were able to go on a ‘Grand Tour’ of Europe taking in both ancient Roman sites and Renaissance art works. These travels influenced interior decoration once back at home, and in Hinxton Hall the ‘Pompeiian Parlour’ drawing room was created in around 1845.