Life at the Hall

Who lived within these walls? What did they grow in the Walled Garden? How did a part of Pompeii end up in the parlour?

Over the centuries Hinxton Hall has housed many characters and hosted countless gatherings and events. The building has greeted Masters of the Manor, Butlers, Chauffeurs, Gardeners, Cooks, French Lady’s Maids, and WW2 service men and women. The grounds have staged fetes, flower shows, balls and shooting parties, and the gates have been open to friends, family, local residents, and eminent guests from far and wide.

Here we bring together a selection of oral histories and written accounts illustrating life at the Hall that we have collected in the course of our research to date.

If you have memories of the Hall you would like to send us please get in touch!

‘An annual show has been instituted in this village for the purpose of the cultivation of cottage gardens, and Tuesday last was fixed upon the first exhibition. It was quite a gala day and the farmers of the village entertaining heartily into the spirit of the thing, gave all their labourers a half-holiday, in order that they might enjoy the festivities of the afternoon. A cricket match on the grounds of the vicarage commenced the proceedings at three o’clock the, the judges having finished their labours, the public were admitted into the show, which was held in a building at the back of the vicarage and was very tastefully decorated with evergreens. Mr Chater, of Saffron Walden, acted as judge and gave a warm commendation to the productions laid before him. Mrs. De Freville and Mrs. Nash sent some splendid geraniums for decoration, which were greatly admired; and besides the fruit and vegetables shown, there were some very ingenious articles exhibited by cottagers, some stuffed birds, and Chinese puzzles, several of shich obtained prizes.’

Among the list of prize winners under the category ‘Gardeners’ Prizes for best collection of vegetables, not exceeding six kinds, from their Master’s Garden: John Beard, gardener to Mrs. De Freville, Hinxton Hall.’

The following year they won a prize for their cucumbers. 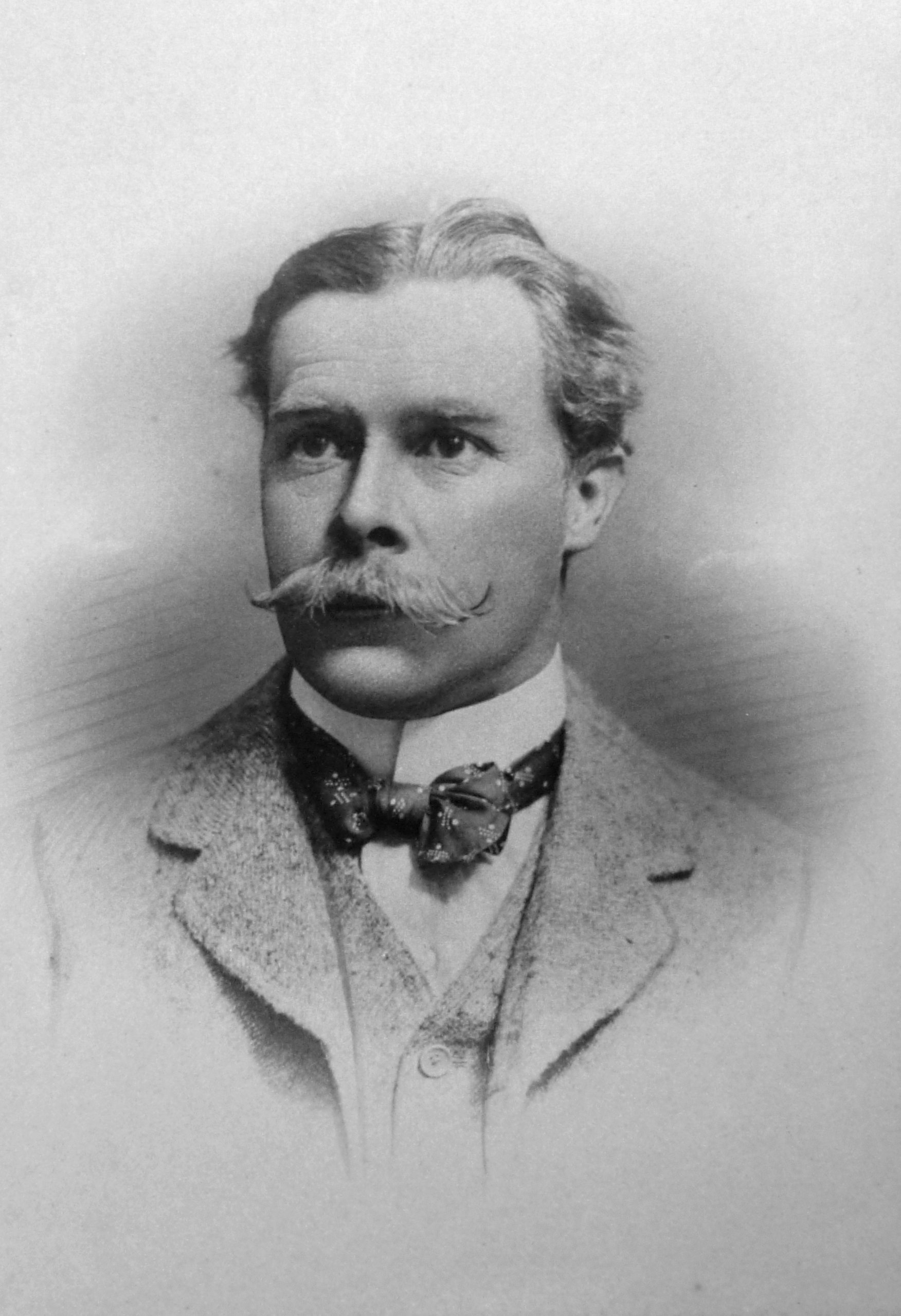 ‘The seat of Major de Freville was a complete holiday in every way. The whole parish was en fete, in a celebration of the Jubilee for which purpose generous and hospitable owner, whose heart and soul appeared centred in every object of comfort and amusement of the large company which had assembled. And a truly loyal company it was and one which caused the gallant Major’s face and that of his amiable lady and friends to beam with delight. The first part of the programme was a capital game of cricket between the married and single, which resulted in a victory for the latter.

Swings were indulged in, prepared for the occasion under several of the stately old tree: music was to be heard in different parts of the grounds, and dancing and other merry making were devised. A spacious booth was erected in the Park and in it a capital tea was supplied to all the labourers in the parish, while the spacious coach-houses were filled with their wives and friends at tea.

The Rev. and Mrs Forster* of Hinxton Vicarage hospitably gave a capital tea in their beautiful grounds to all the children in the parish and after each child had been presented with a Jubilee medal, the company repaired to the Hall grounds. At five o’clock, all the farmers and tradesmen, with wives and families were ushered into an elegant and spacious room in the Hall and entertained at tea, while the worthy master, his lady and friends spared no pains in waiting upon the company personally.

Then came on athletic sports: and several prizes were competed for by the children on the lawn, in which Mrs de Freville and her friends took the management. Further refreshments being served , “The Queen’s health” was honoured: and “Major and Mrs de Freville’s health” was drunk with musical honours. The Committee also were thanked for their services.

Next came the distribution of prizes which were presented by the amiable and kind-hearted mistress of Hinxton Hall. Later on, some handsome balloons were sent up: and eh the time came for the people to leave the Park, the worthy Vicar held an open-air service on the village green and it was well attended.

On Wednesday through the generosity and liberality of Major de Freville and his lady a ball was given to all the servants on the estate, when a capital super was served in the spacious coach-house. Mr Reynolds, house steward, proposed “The health of the Major, Mrs. De Freville and family and future heir” and this was drunk with musical hours. There were other toasts and a very enjoyable evening was spent.’

Extract from The Cambridge Scrapbook, compiled from newspaper entries 1888-1990 by Mike Petty

‘Hinxton’s Lady Bountiful. She came to live with her husband at Hinxton Hall in 1917 and took an active interest in village life, being connected with the Mothers’ Union and Women’s Conservative Association. Every Christmas she entertained the children at the Hall and extended similar hospitality to the old folk in the New Year. She ran a clothing and coal club and was a willing supporter of anything which had as its object the benefit of the village.’ 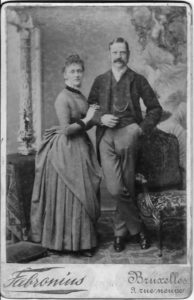 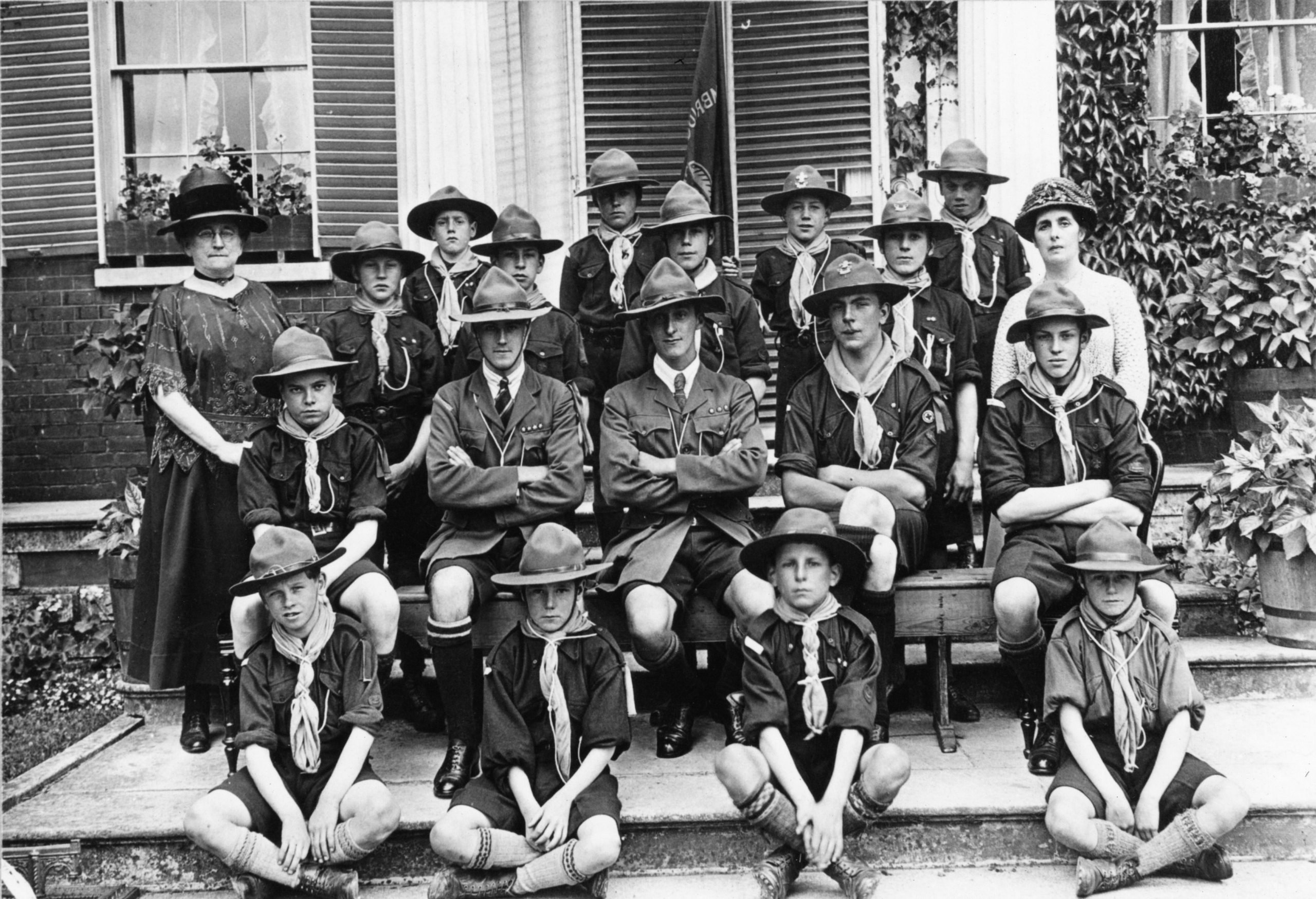 Scouts in the servants’ quarters

Extract from The Life and Times of Hinxton, by Virginia Walker, Hinxton resident

‘In the 1930s Hinxton children could belong to the Band of Hope, a temperance club organized by the church, which met at the Scout Hut at Hinxton Hall, where the girls sewed ‘for children abroad’ and played Lotto. The Scouts too met there, of course, which was an improvement on their earlier meeting place of the servants’ quarters at Hinxton Hall. The Robinson family and their staff at the Hall encouraged children’s activities, like the de Frevilles before them, and their chauffeur used to arrange annual children’s races with penny prizes.’ 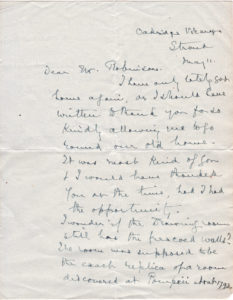 A letter from Frederic de Freville, likely to be early 1900s

I have only lately got home again, as I should have written to thank you for so kindly allowing me to go round our old house. It was most kind of you and I would have thanked you at the time, had I had the opportunity.

I wonder if the Drawing room still has the frescoed walls? The room was supposed to be the exact replica of a room discovered at Pompeii about 1793, and my great-grandfather had Italian artists over from Naples to paint the walls.

I did notice the painted glass window under the stairs (painted by the same artists) had disappeared.

With many thanks, yours sincerely,

Laura and Rita Robinson (centre and right) with a neighbour, circa 1950 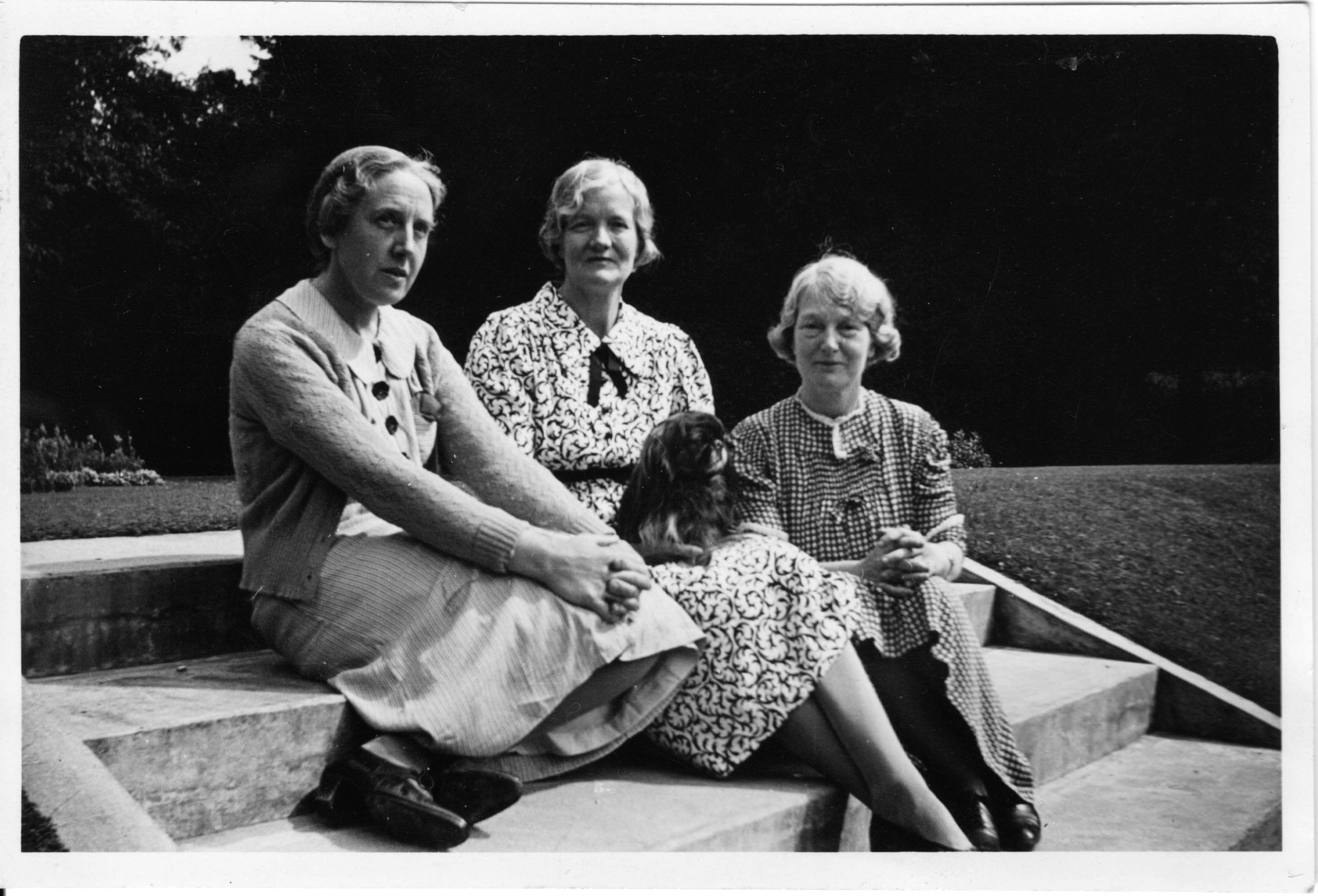 Grapes in the greenhouses and Sunday school in the church

The sisters were well liked in Hinxton because they were very generous and very nice ladies. They used to take Sunday School in the Church. Rita used to have the little ones and Laura used to have the big ones. I remember going and enjoying it. One of the Robinson sisters played the organ for the church choir, I was one of the first girls to be let into the choir.”

Memory from Lavinia Robinson, relative of Rita and Laura Robinson

“The sisters were very frugal in their own household. Long after world war two rationing had ended, the sisters would only ever buy one half of a half pound block of butter at a time and then buy the other half the next time they went to the village shop. Jack Page, their Head Gardener, would recount the times when he would ask the sisters if he could buy something like a bottle of linseed oil to oil the benches, and this request would leave them upset for several days.”

“In the 1940s the Robinson sisters used to get the bus to Cambridge. On their return journeys they would frequently fall asleep and the bus conductor would have to wake them up when they arrived at the Hall gates, which incidentally was not a stop on the bus route!” 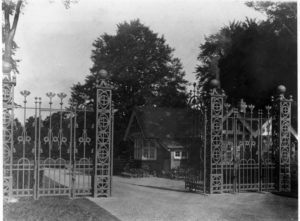